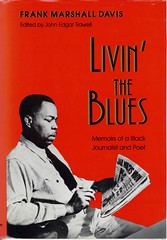 Bro. Frank Marshall Davis (Delta Chapter 1925 – Kansas State University) was a prominent African American poet and journalist in the 1930s and 1940s. Davis was a significant figure during the Great Depression and the Second World War. Davis turned his back on a sustained literary career by moving to Hawaii in 1948. There he cut himself off from the busy world of Chicago writers and virtually disappeared from literary history until interest in his work was revived in the 1960s Black Arts Movement, which hailed him as a pioneer of black poetry and established him as a pioneer of black poetry. In this book he chronicles joining Phi Beta Sigma at Delta Chapter and he is very forthcoming about his joining SIGMA. A must read for any Sigma Brother. His 1925 membership card, which he carried in his wallet ever since he joined Sigma, is housed at the Kansas State University Hale Library and its signed by Founder A.L. Taylor. You can get a copy of his autobiography ” Livin’ the Blues” at amazon.com, bookfinder.com or any major book store. 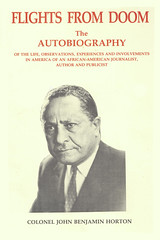 Bro. Colonel John Benjamin Horton (Epsilon Beta Sigma Chapter 1945 – Louisville, KY) was appointed the National Director of Publicity for Phi Beta Sigma Fraternity, under the administration of Bro. President Ross Oliver “Ras” Johnson (1948-1950). In his autobiography “Flights From Doom”, Bro. Horton talks about his role as Publicity Director and recounts Founder Taylor’s account of starting the Fraternity. Flights of Doom, I believe is OUT OF PRINT, but is on file at a few libraries in the state of Kentucky. Bro. Col. Horton is one of the most noted African-American Journalist in the history of Kentucky. You can get copies of his other publications on Amazon and Bookfinder.

Bro. Colonel J. Benjamin Horton, African American Journalist, Author and Publicist and he served as National Director of Publicity for Sigma for 11 years and served under six administrations.